LMA static show at Gaydon
For some years now I’ve been considering visiting the LMA show at the Heritage Motor Centre, Gaydon in Warwickshire. My intension this year was to make it a weekend away so that my wife and I could take in Vulcan XM655 at Wellesbourne. Unfortunately the Vulcan wasn’t open to the public this particular weekend so the Saturday was spent visiting a local National Trust property.
Anyway, we visited Gaydon on Sunday October 25th. The entrance fee for two BMFA members was a combined price of £10. The normal cost is £12 for adults or, £10 for concessions so there is quite a saving there. The venue is a modern building, built on an old RAF base, the motor exhibits are on the ground floor whilst the first floor houses several conference rooms, toilet facilities and a café selling very reasonably priced food.
If you have never visited before it is well worth the trip if you are remotely interested in cars. The LMA used up just about every square inch of space upstairs with displays of both complete models and those in the process of being built. In addition to this there were approximately 20 trade stands including SLEC, Als’ Models, Nexus and many more specialised stands selling such items as Gas Turbines to Model Pilots and JR Radio to Glass Fibre supplies.
Some of the exhibits were something to die for. There was a room full of turbine powered fighters from Hunters, Lightings and Vampires through to F15s, Hawks and Euro fighters. There were many other types, in fact I have probably forgotten more than I can remember.
In another room there were many WW11 aircraft including Spitfires, Hurricanes, Mustangs, Me109s, FW190s and one particularly stunning Corsair. As well as all the normal trappings of, retractable undercarriage and operating flaps this model also had electrically operated folding wings. Not bad for a model of approximately 10 foot wingspan.
In another large room there were several multi-engined aircraft and very large vintage gliders. Included here was a very creditable Mosquito with a wingspan of around 15-16 feet.
My favourite of all the exhibits was a yellow Gnat belonging to Ali Machinchy. As you can tell by the accompanying photographs this model is really something to admire. Alongside this was a Vampire that was equally as good but I’m afraid you would think twice about releasing it into the sky for fear of damaging it.
So, if you are at a loose end next October, I can strongly recommend this as a day out or why not combine it with a visit to Wellsbourne.
Hon. Sec. 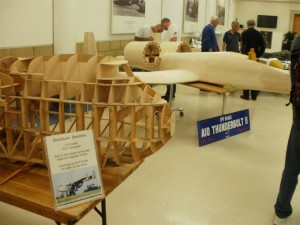 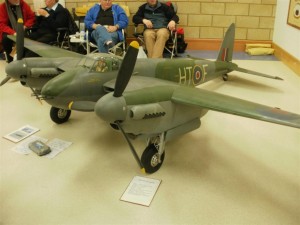 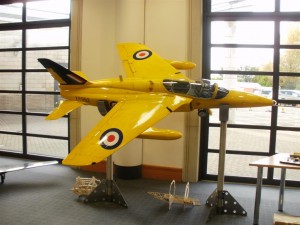 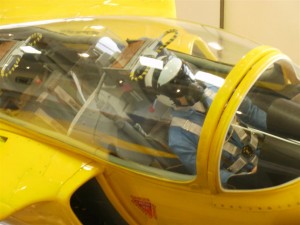 Leave a Reply to 1066 Cancel reply