1. All fliers must observe field discipline and comply with the Air Navigation Order, all relevant BMFA safety codes as contained within the BMFA Members’ Handbook and Civil publication (CAP) 658.
2. On matters of field safety needing an immediate decision, the responsibility lies with NFCs, a member of the Executive Committee or two committee members, in that order. Any instructions must be accepted without dissent. However, should a member believe the instructions to be wrong, then he should bring this to the attention of the Committee through Article 17 of the Constitution.
3. Any pilot not holding their solo qualification for the type of aircraft they are flying, must not fly without the supervision of an NFC (all B Cert holders, and all A Cert holders nominated by the committee).
4. Due consideration must be given at all times to trainee or novice pilots in the circuit. In the event that the pleasure or concentration of a pilot is affected by the flying style of another, precedence will be given to the pilot who was airborne first. Intimidating flying of any sort is not permitted.
5. Flying Hours to be from 10am until 9pm, no noisy planes e.g. I.C. or EDF after 6pm. No more than 3 I/C powered aircraft to be in the air at any one time.  4 aircraft may be flown when one or more is electric powered, or 5 if at least one is a glider or electric powered sailplane.
6. All flying is to be done in the designated areas only (see diagram below).
The only exception to this is on takeoff or landing when the wind direction dictates – and models must NEVER cross the lane between the patch and the bungalow. 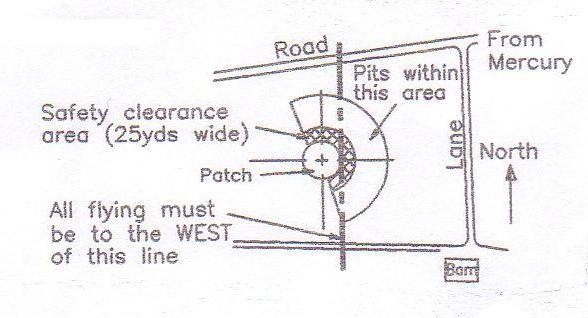 7. All fliers must observe the established flight line and stand in the designated area whilst flying. Hand launching from the patch must take place up wind in front of the pilots’ line. Any spectators must remain in the pits area whilst flying is in progress.
8. Any person wishing to enter or cross the runway area must seek clearance from any pilots flying at the time before doing so. No more than 3 I/C powered aircraft to be in the air at any one time.  4 aircraft may be flown when one or more is electric powered, or 5 if at least one is a glider or electric powered sailplane.
9. The patch is not to be used for take-off, landing or low passes while mowing or rolling is taking place. Flying may continue, but the patch is not to be used.
10. All vehicles must be parked in the designated area only. Access to the fields and road must be maintained at all times.
11. When flying at sites other than Chidden Down (e.g. the sports field at Buriton), the pilots should form a line with their backs to spectators and the pits area, with at least 10 paces spacing between the pilots’ line and pits.
12. For 35MHz only: Use ODD frequencies only. The frequency allocation system in use is ‘peg on’ system with name and channel number clipped onto windsock pole.
13. For 35MHz only: Before switching on, a pilot must ensure that he is operating on the frequency he believes he is on and must display the appropriate frequency pennant on his transmitter.
14. For 35MHz only: All transmitter aerials must remain retracted unless the model is being flown. The flight is defined from the point of release to when the engine is stopped or the model is restrained.
15. For 35MHz only: Transmitters should not be taken away from the flight line when retrieving an aircraft, unless to do so would aid retrieval of the model. In this instance the matter should be brought to the attention of the safety officers so that this may be carried out without the risk of over-flying the transmitter.
16. Should an aircraft go out of control, the first priority must be the safety of persons with the second being avoidance of damage to property. A warning is to be shouted by the pilot which is to be taken up by other members.
17. Before starting an engine the model must be suitably restrained either by a tether or by an assistant.
18. In the interest of safety, assistance should be sought when running up engines and taking models to the runway for take-off. All helpers must have BMFA membership.
19. Appropriate use should be made of all available pit area, and under no circumstances should engines be set up in the immediate vicinity of the pilots who are flying at that time. Where practical, models should face outward from the pit area.
20. Under no circumstances must an engine be run unless all persons are behind the line of the propeller with the exception of the person starting the engine. When carrying out power checks all persons including the pilot are to be behind the line of the propeller.
21. Models having their engines run in on the ground must not be left unattended whilst the engine is running.
22. All models are subject to random safety spot checks. If it is thought that a model is unsafe to fly or does not conform to Club rules, it will be grounded until rectified.
23. Members must ensure that all I.C. models comply with the DoE Noise Code which is below 82 decibels at 7 metres. Electric models will be tested at the discretion of a committee member. Notwithstanding, if in the opinion of a Committee member a model is excessively noisy in the air, it is to be grounded until rectified.
24. All operational fail-safes in use on powered models operated from our Club site must set the throttle to tick-over, not hold, (stopped in the case of electric power) regardless of the other control operations governed by the failsafe. Particular care must be taken when operating on Pulse Code Modulation (PCM) or when swapping from normal modulation (PPM) to PCM to ensure that the Failsafe is correctly programmed. Fail-safes are to be checked prior to flight by switching the transmitter off whilst the model is restrained.
25. Mobile telephones should not be kept in close proximity to computerised transmitters and it is recommended that they be kept in the flight box.
26. No smoking is permitted in the vicinity of inflammable fuels and materials.
27. Children must be closely supervised at all times and must not be allowed to run around the pit area or runways.
28. No dogs are allowed at the flying field unless kept on a lead or tethered.
29. Any accident involving a third party or another member must be reported to the clubs BMFA Delegate as soon as possible, who will then inform the Executive Committee.