Posted on December 1, 2022 by Colin-Cowplain

We always expect to lose a few flying sessions due to wind and/or rain through the winter months and that’s exactly what happened during what was a very mild November with a lot of rain. We were rained off on a couple of Sundays mornings but strangely some Friday afternoons turned out to be really good. Of course the midweekers were able to choose the days with the best weather so managed to fly fairly regularly throughout the month. After flying on one Friday afternoon I snapped this glorious sunset as we were packing up. 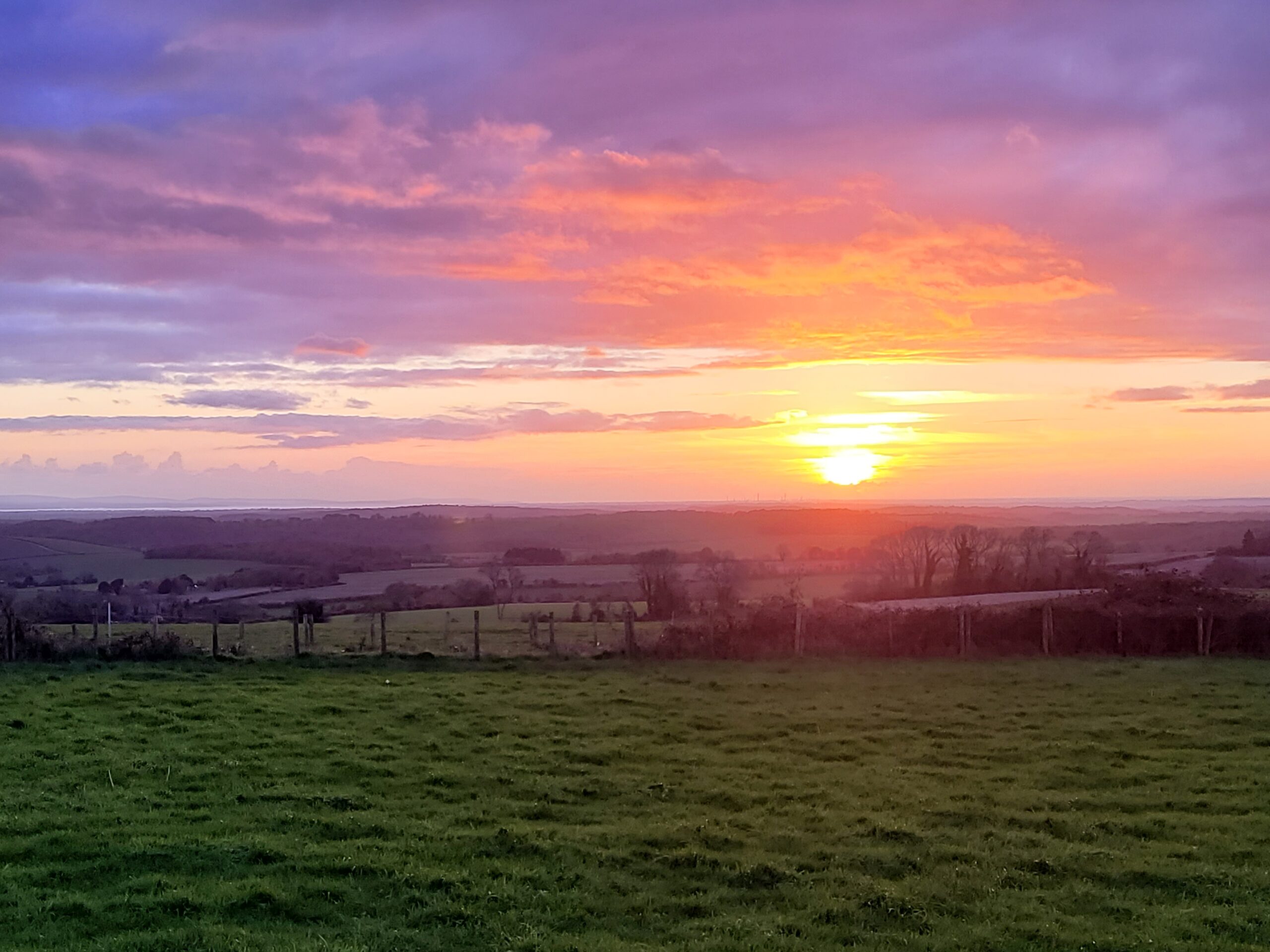 With the weather being both wet and warm the grass has continued to grow so the FARTS (Friday Afternoon Rural Trimming Society) dragged out the mower a few times.

At lunchtime on Friday 18th November as Chas and Captain Slow were driving down the track to the field they spotted a pick-up truck in the process of fly tipping a load of builders waste onto the track alongside the barn. As the driver saw the cars approaching he shot off down the bottom road and away before anyone could take a note of his number. 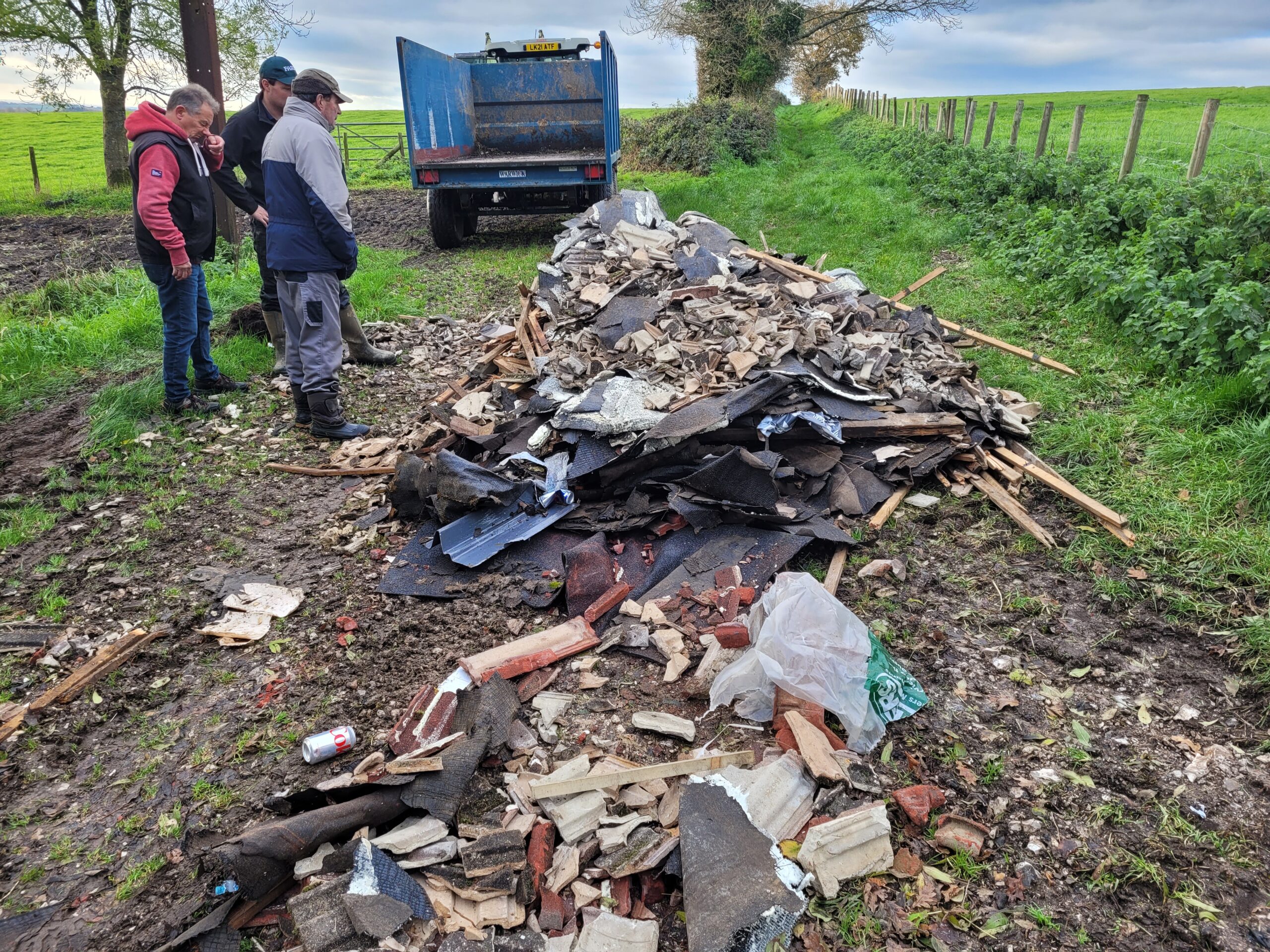 The rubble completely blocked the track and prevented us from parking there. Fortunately following a quick call to Farmer George his son Will very quickly arrived with a tractor and trailer and made short work of picking up the waste and taking it all away. There are some truly awful people around who think they can do whatever they want with no thought of the affect on others. As a club we are lucky to have such great farmers who were able to resolve the problem for us within a very short time, we were very grateful for their help.

Not too many new models appeared at the patch this month but early in Nov this box of surprises turned up at my house. Well it wasn’t actually a surprise to me as I’d ordered it on Woody’s behalf when it was at a knockdown price in the Banggood UK warehouse. 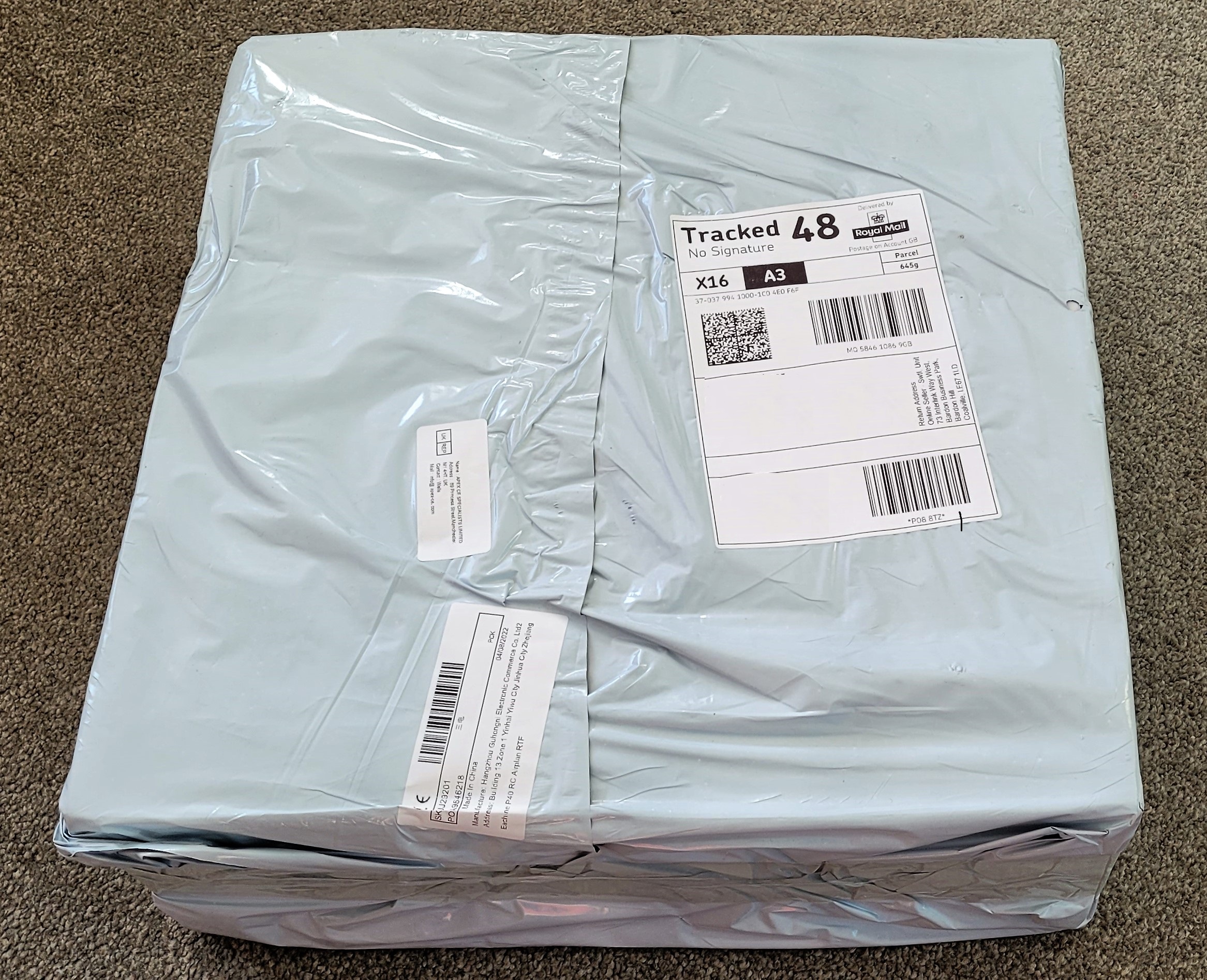 It’s another of the tiny gyro equipped fighters that come completely ready to fly straight out of the box and even come with a transmitter. This one is a P-40 Warhawk, the first one of these in the club and Woody soon found that it flies just as well as all the others in the range which includes the Trojan, Corsair, BF109, Mustang, Raptor, and the Spitfire. 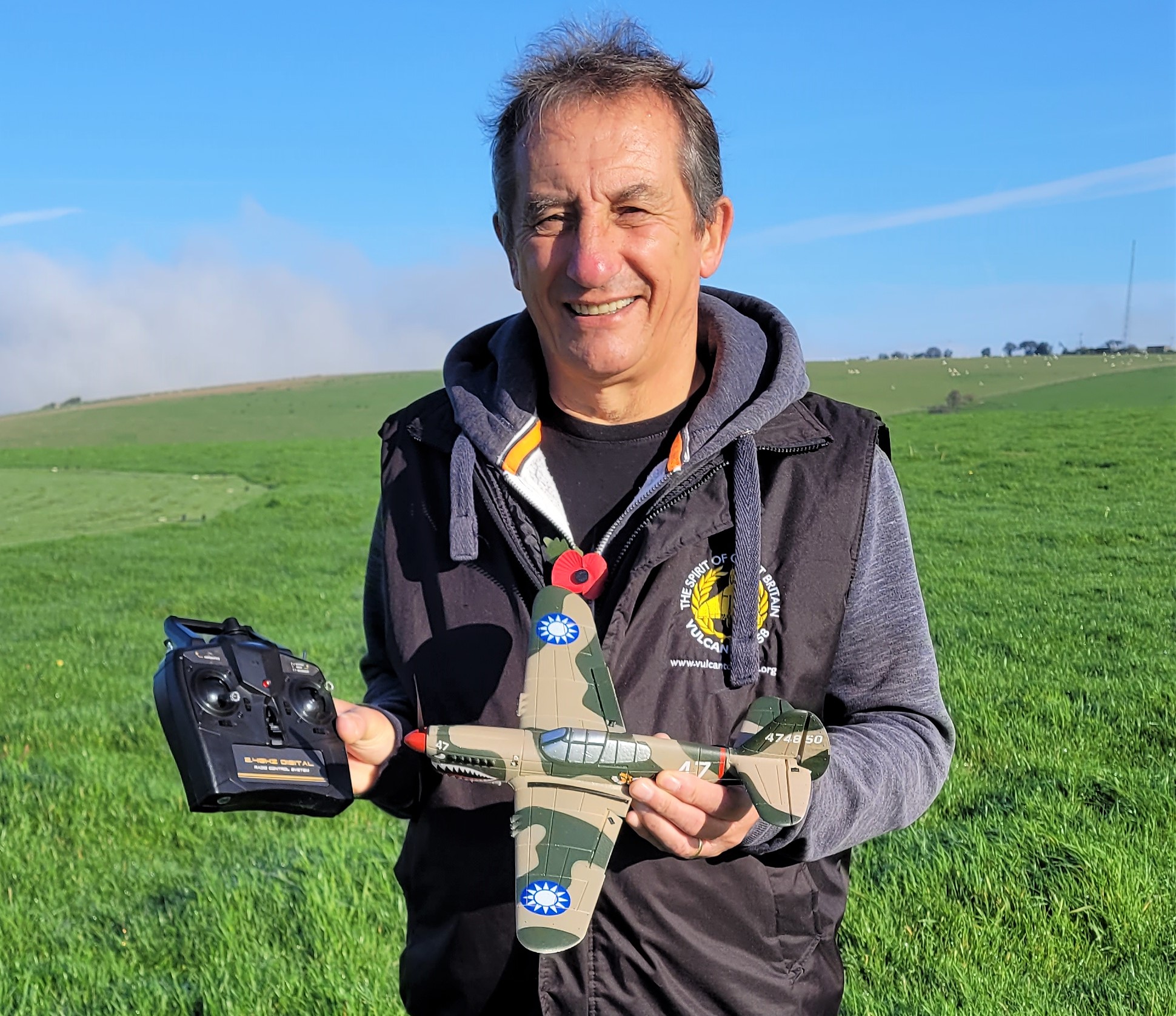 Woody’s Warhawk was just £68.43 in a Flash Sale and that included 3 batteries. As it came from the UK warehouse the package arrived in a couple of days. At the time of writing the UK Warehouse has sold out of the Warhawk but it’s available from China although the price is £101.63 and it would take three or four weeks to arrive. Many of the range are available from various UK retailers but I think most of them cost around £100. 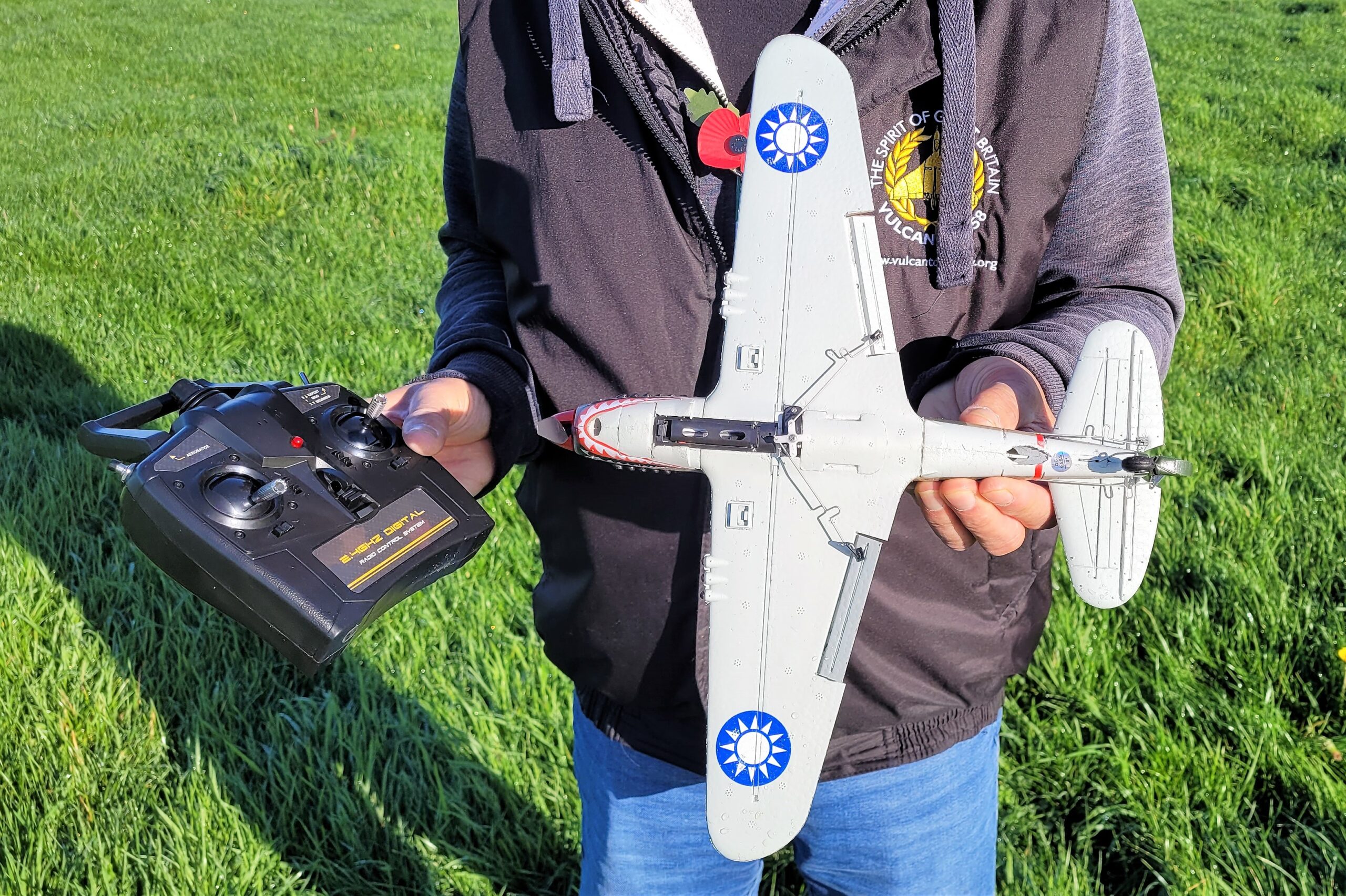 Woody loves the way it flies and has been using the one button press roll or loop function as well as perfecting his low passes. You can see a bit of his flying in this month’s video.

Bob the Builder has also splashed out on a mini warbird and he chose the Mustang. Bob had an ulterior motive with his purchase as he intends taking it with him when he visits family in New Zealand where I expect his grandson will be flying it. Needless to say Bob felt it was only right to test fly the Spitfire before taking it to the other side of the world. 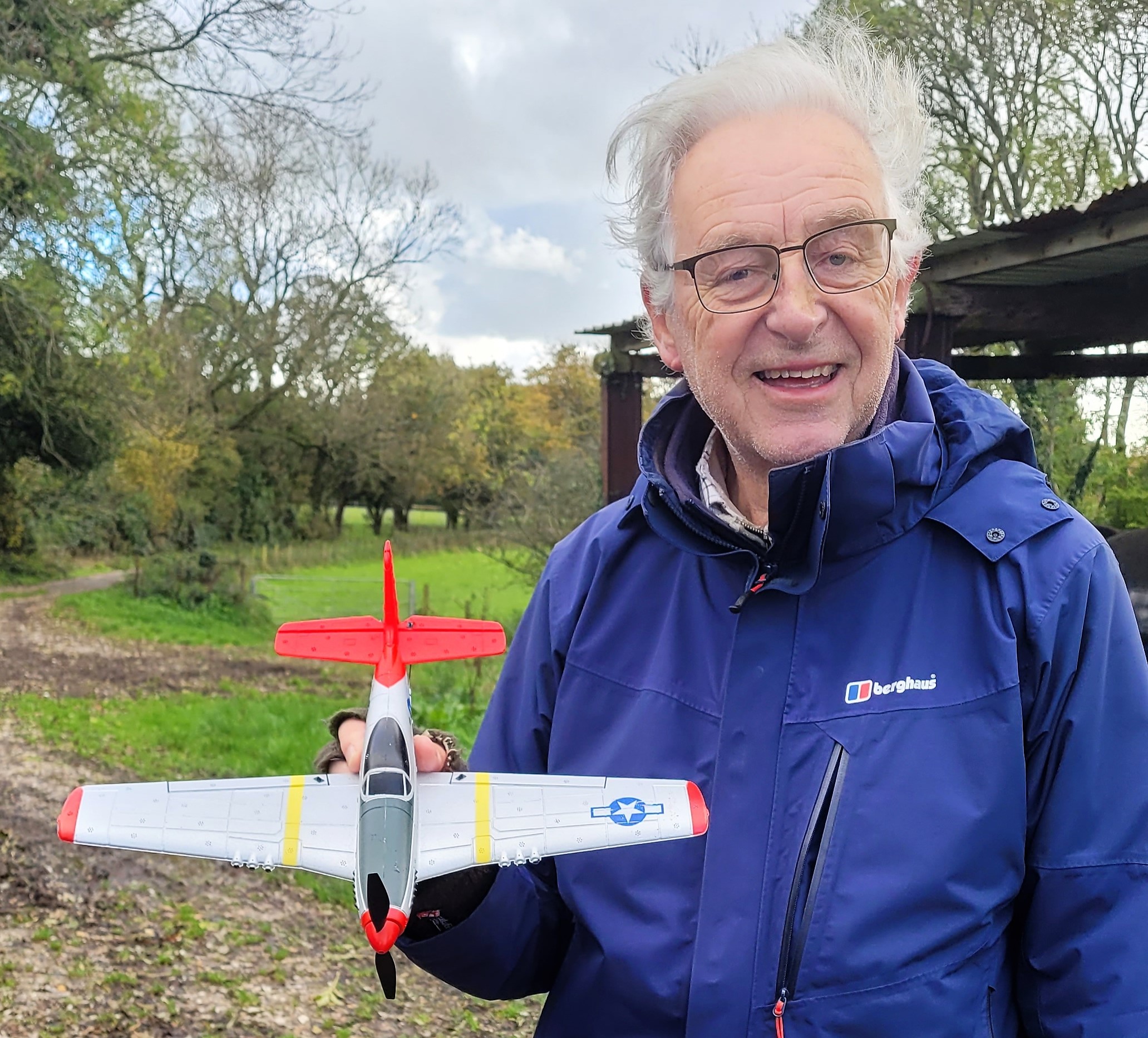 All went well and after a few tests he pronounced it fit to fly. Bob has checked with the airline and is happy that he’ll be able to take the Spit and it’s batteries on the flight as hand luggage. Have a great trip Bob, don’t forget to send some photos of flying in New Zealand.

In November I decided to bring out my foamboard Yak-130 that I hadn’t flown for a long time. It came from Banggood and is similar to the Su-27 and Mig-29 that many of us fly except that the front half of the fuselage is a box section rather than just a profile. 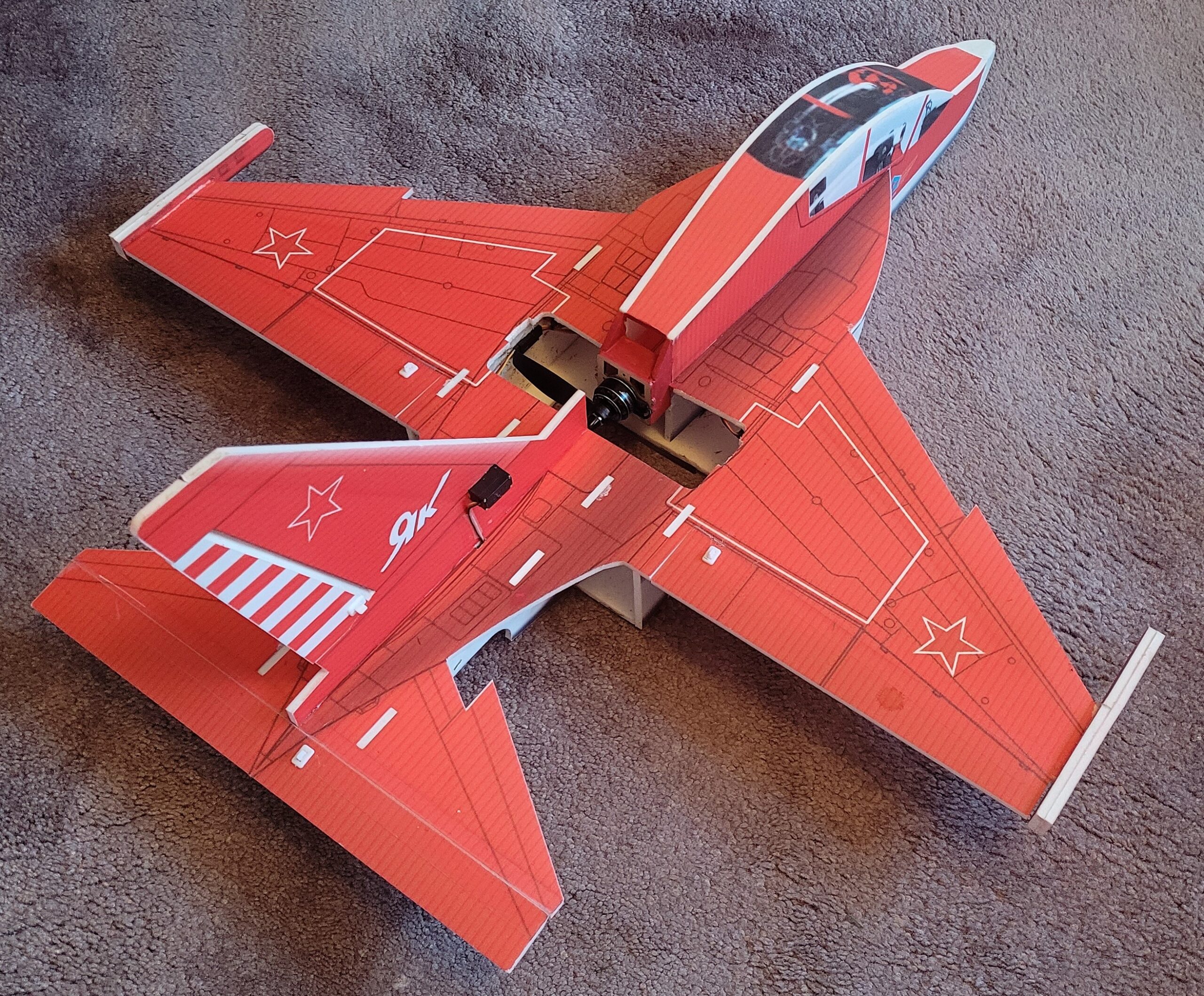 I think it looks better than the others but overall its’ flying characteristics probably aren’t as good. I have added a rudder to improve the handling as, like the others, it is reluctant to turn when the nose is high and there’s not much speed. The rudder helps and also means the Yak can spin which is does very well although it’s reluctant to come out of the spin. 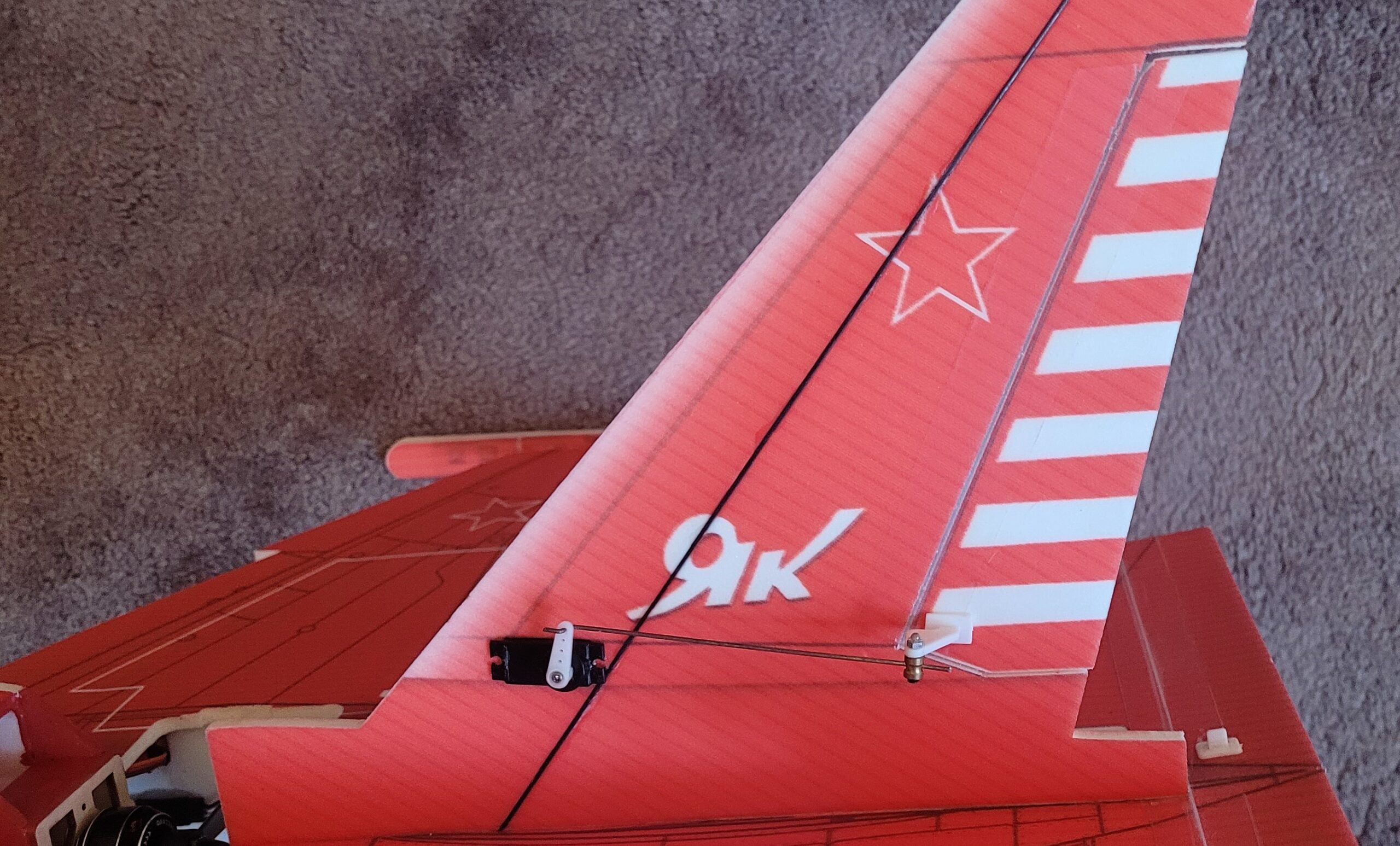 I stopped flying it because it was noisy, like the others it has a mid-mounted motor and the propeller generates a lot of noise where it’s close to the foamboard. The solution with the Su-27 and Mig-29 is to enlarge the slot the prop runs in, mostly in front of the prop. It makes a big difference but on the Yak I could only enlarge the slot a small amount because the servos were in the way. The obvious answer was to move the motor back towards the rear of the slot and after many months of ignoring the problem I finally got round to doing something about it! I cut the ply motor mounting plate away from its’ original position directly on the foam and made up a balsa box to space the motor 20mm further back. 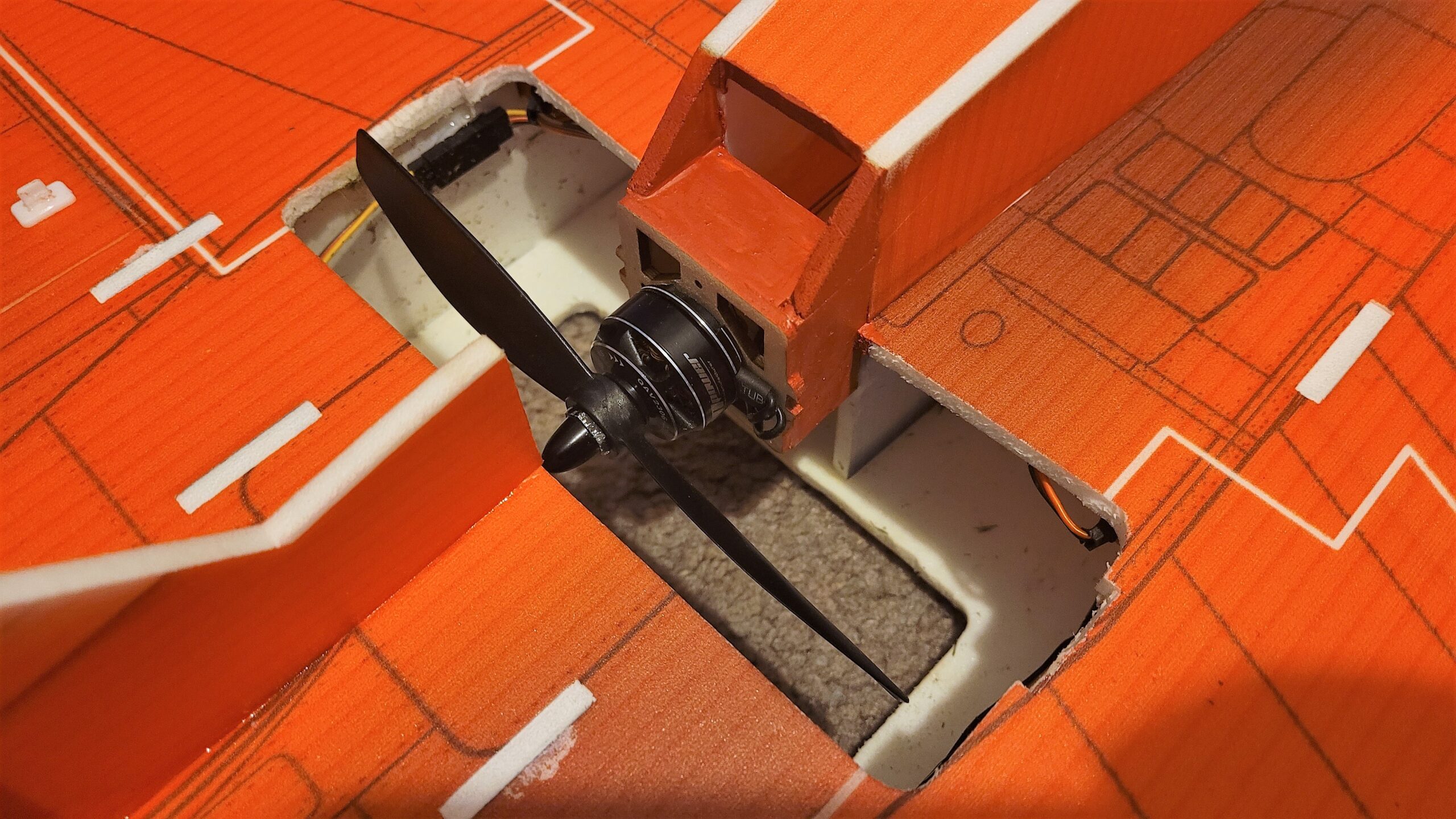 The prop is now well clear of the foam at the front but still far enough away from the foam behind it to not be a problem. The result is a big noise reduction, still not quiet but much better than before and I’m happy to fly it now. On the first couple of flights the motor started cutting out and I found the speed controller was overheating so I added an air scoop to the hatch on the underside and that seems to have solved the problem. 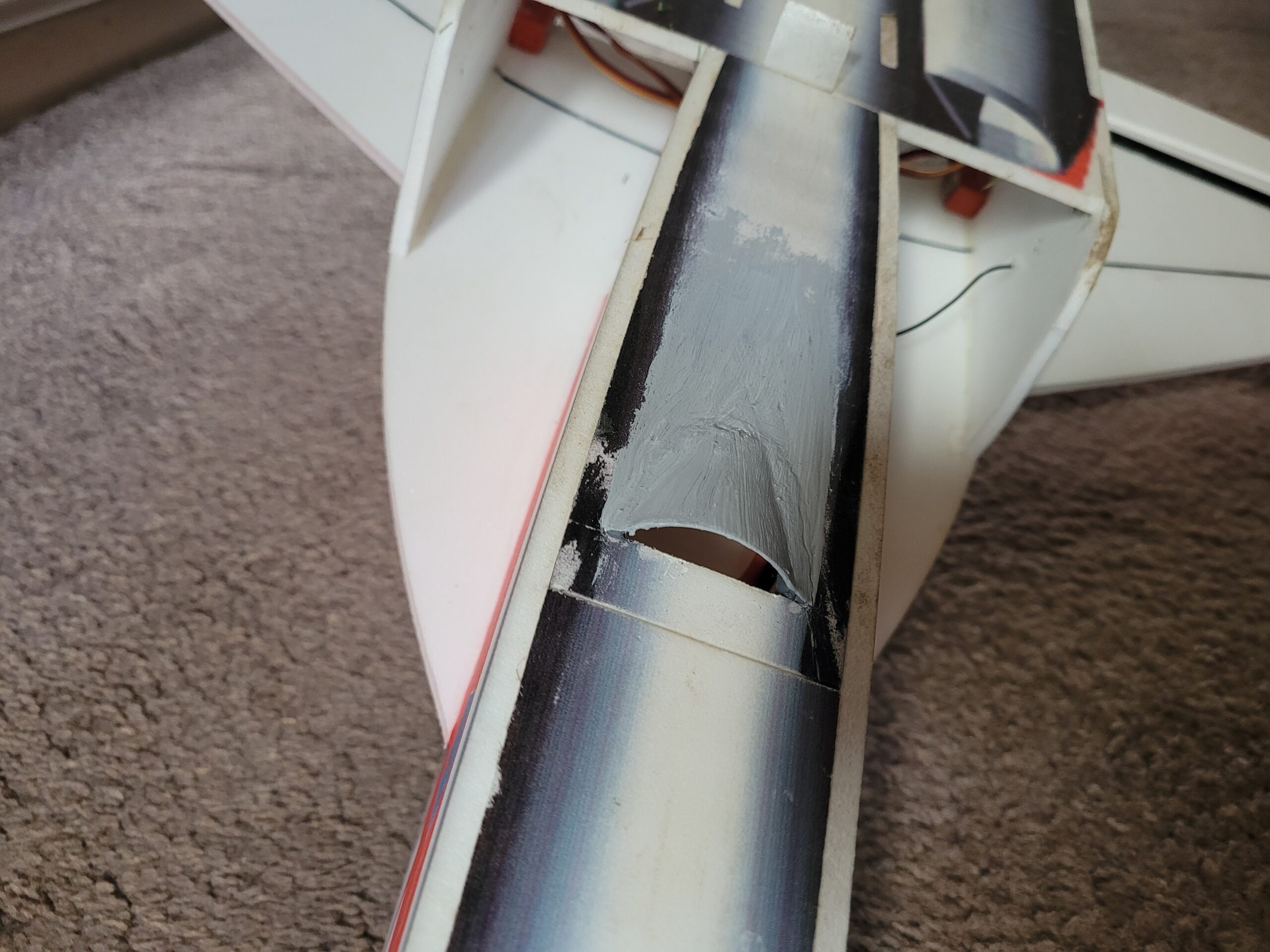 As soon as I started flying it again that big bully Gordon Bennett decided the Yak was fair game and started attacking it, something I obviously discouraged…! After a few battles the inevitable coming together happened and the planes spun down locked together. At first look it seemed that the only damage was to one of the fins of Gordon’s Mig which had been suitably chewed by the prop of my Yak and we both flew again with no further problems. 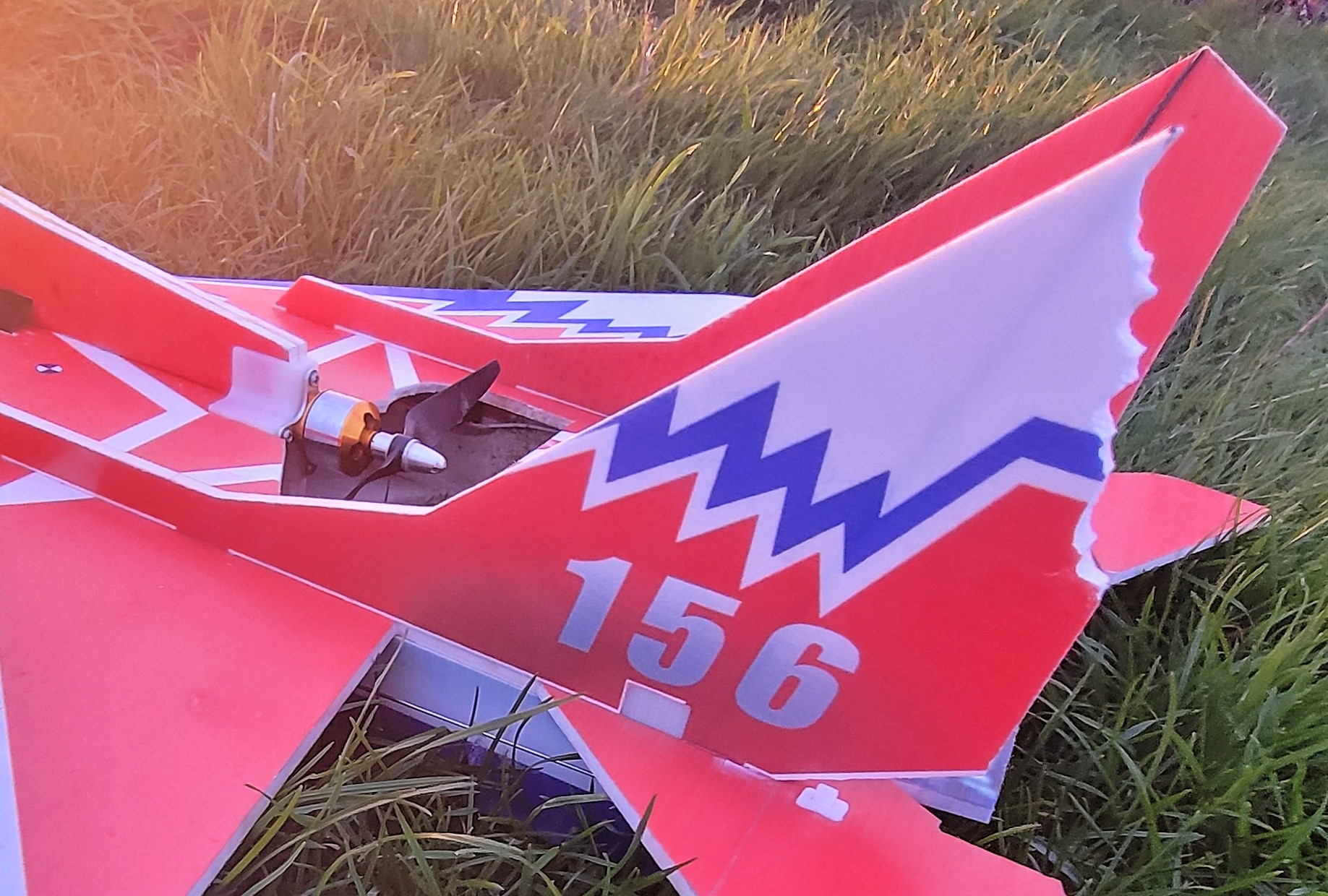 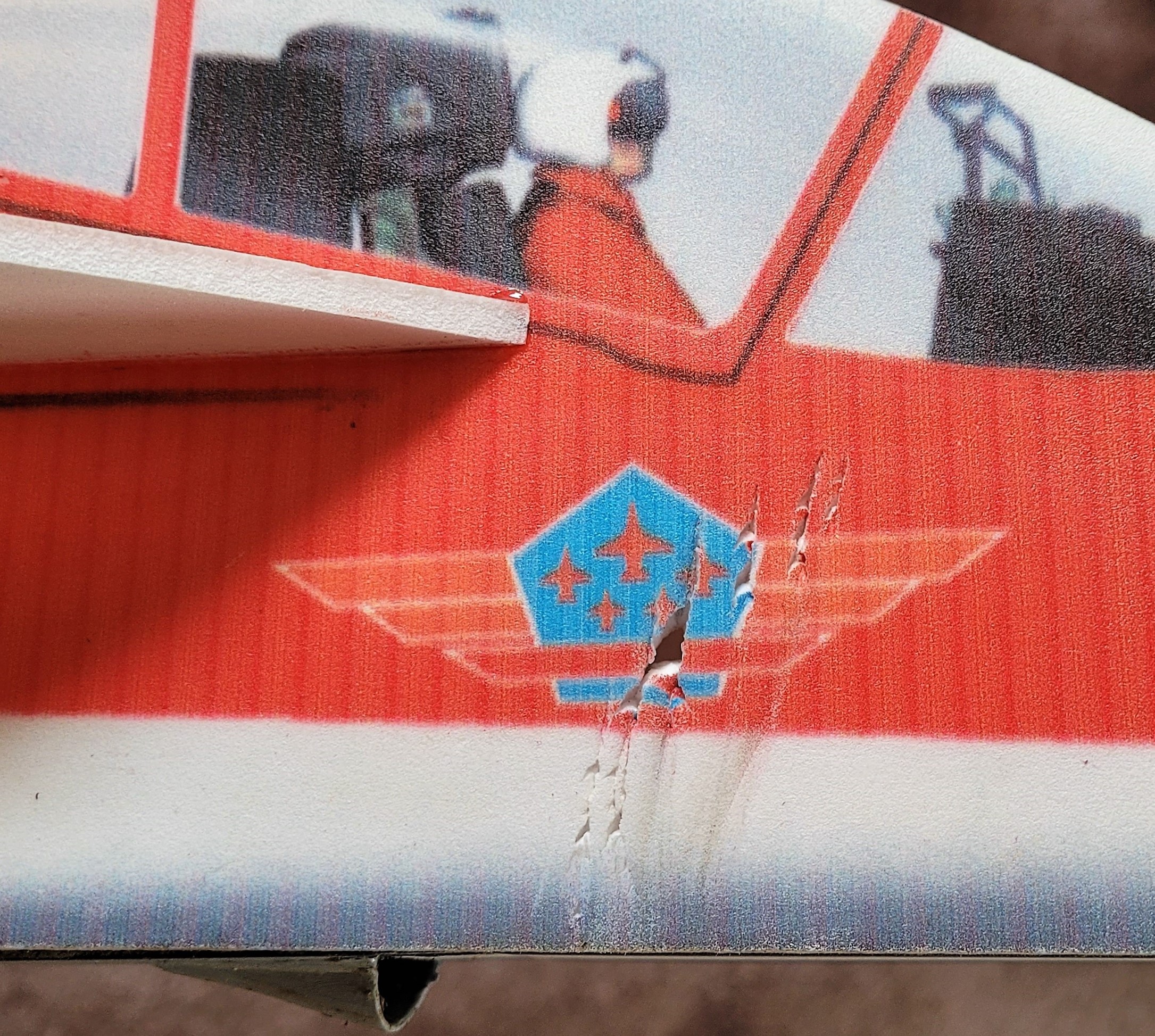 Back to the tiny planes again now, this time it’s Mini Mike who’s bought himself a Bf109. 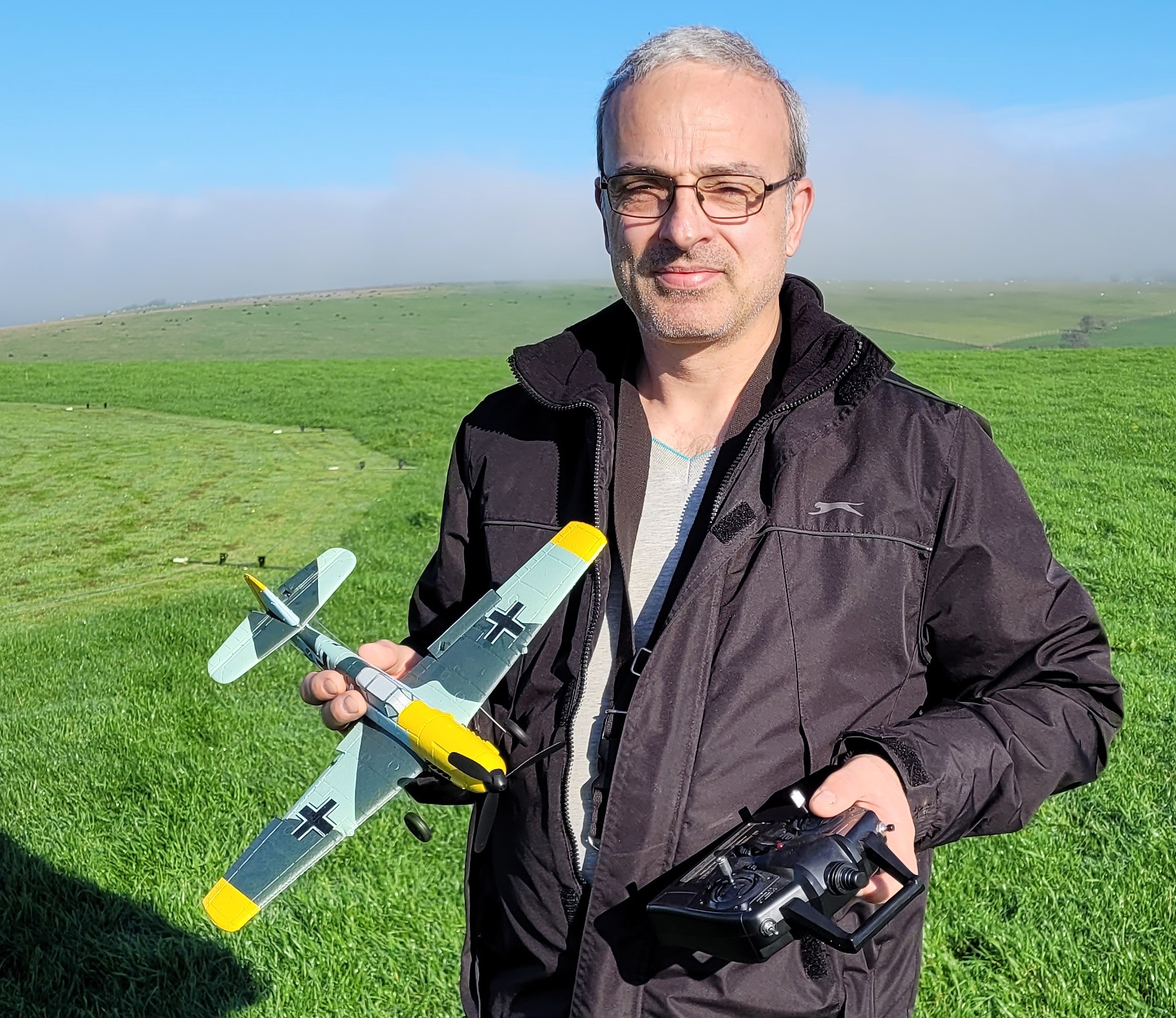 On the first flight Mike found the plane climbed constantly and he was having to hold in almost full down elevator to stop the climb. Before the next flight he asked for some ideas from an expert (me!) and carefully listened to the advice about switching between the gyro stages, setting everything up, and flying tips. So much better informed he then had a second flight and this time it was…exactly the same! Ok so obviously more investigation is required but I’m sure Mike will soon get it sorted out and flying as well as the others. 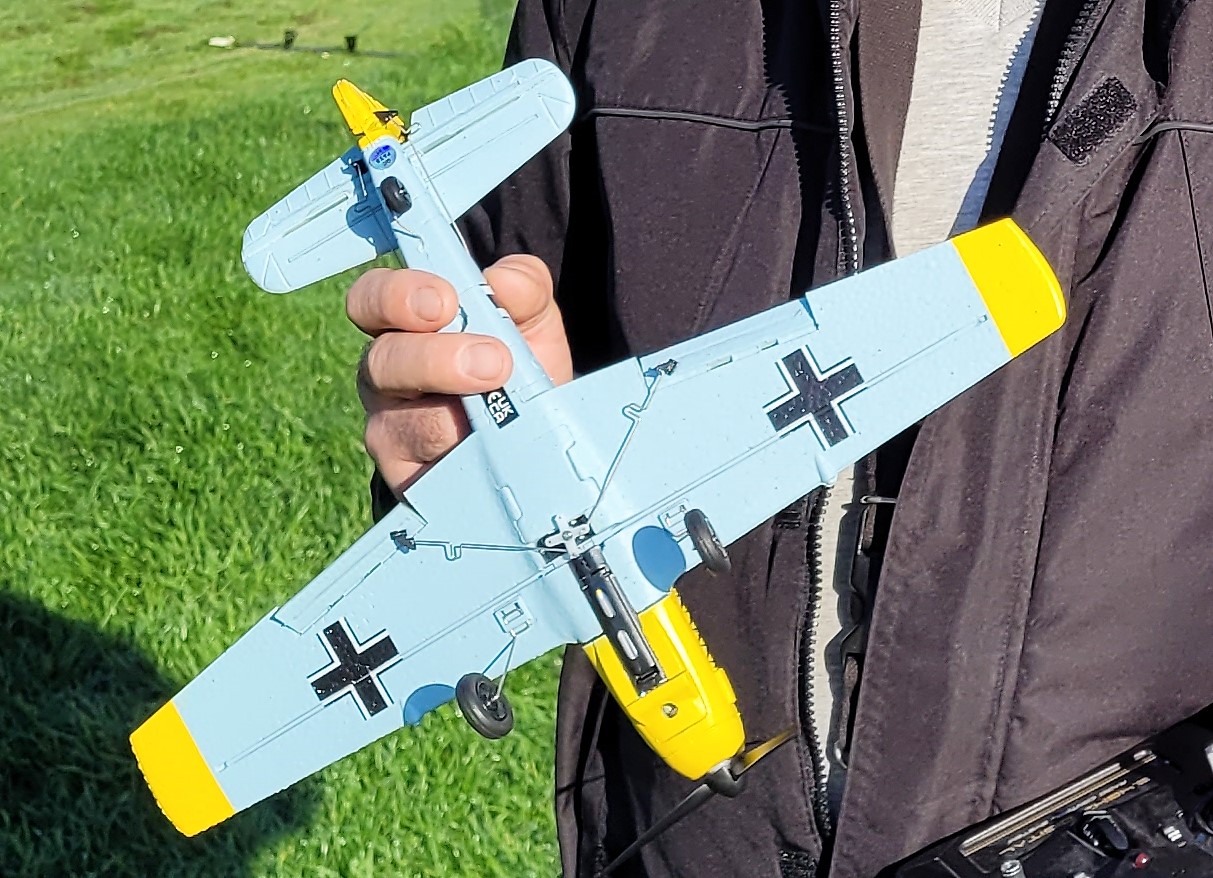 Watch this space, I hope to be able to report more success in the December Patch News.

Following the first successful flights of his Flite Test Alpha last month young Charlie decided it needed a bit of colour. For the first few flights the Alpha had been in bare white foamboard and the damp grass proved to be a problem, the paper covering the foam started to peel away when it got wet. So this month Charlie painted it to match his jumper! 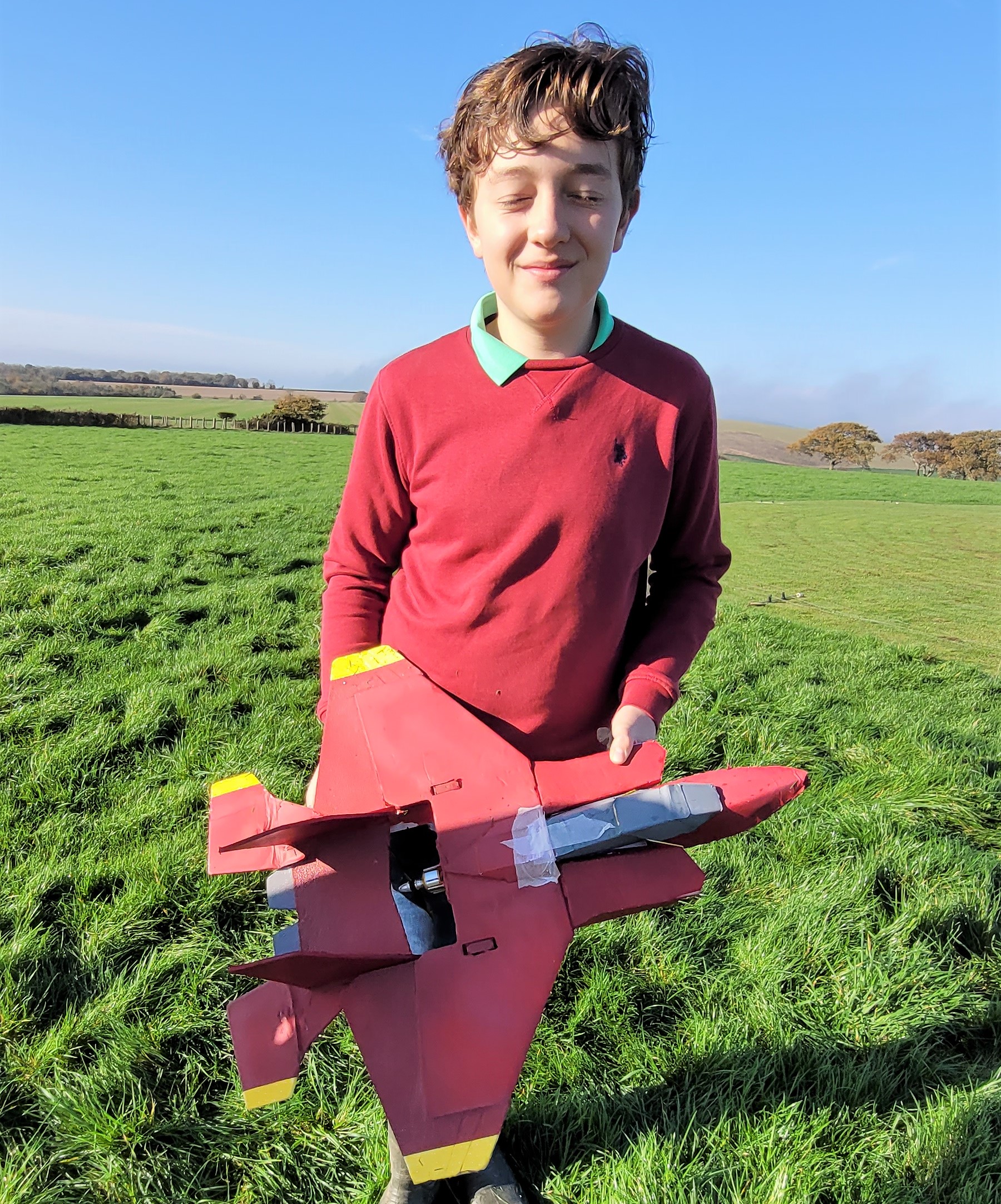 I reckon this was so it wouldn’t show when he got the paint all over his jumper! It looks much smarter with the new colour scheme and should be better protected from the wet grass at the field. Charlie is now concentrating on making a few adjustments to get the Alpha flying even better. You can see how it flies in the video and in the FPV photo below.

1066 has been working on a new foam model of his own design and this required the use of an incidence meter to be sure he had the correct relative incidence between the wings and the tailplane. Fortunately 1066 has a meter that he reckons he made about thirty years ago but hadn’t used it for several years and had even thought about binning it a few times. 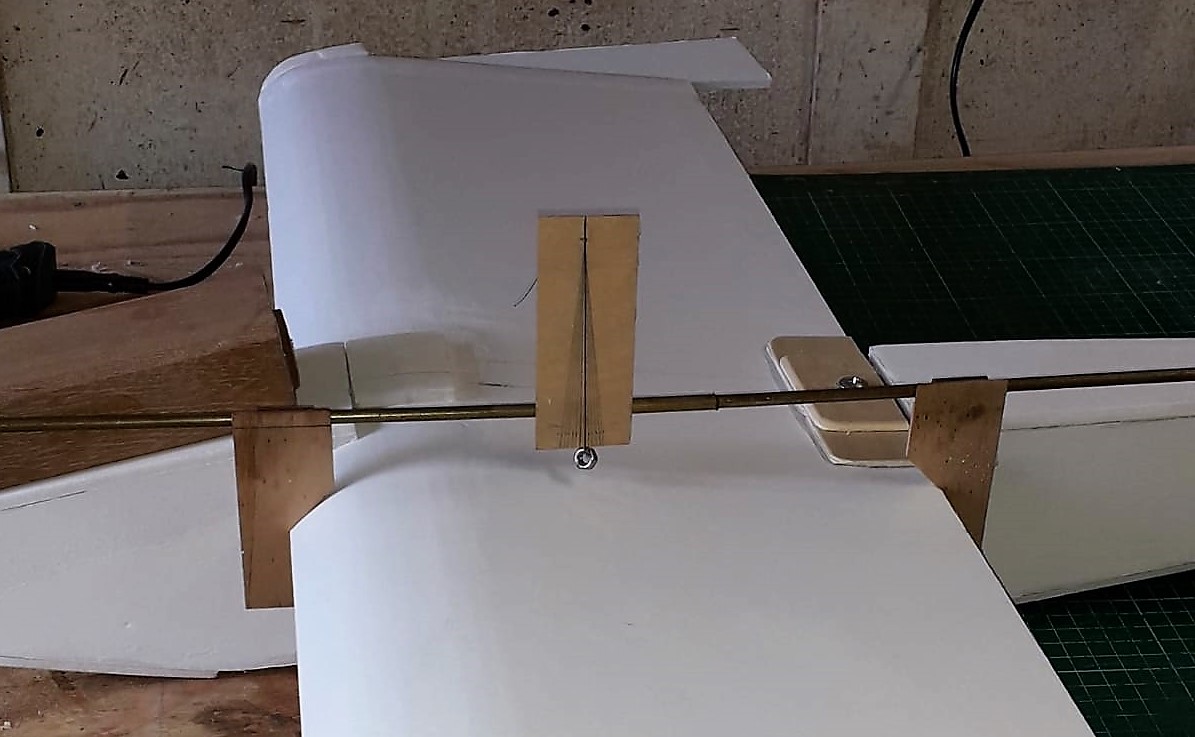 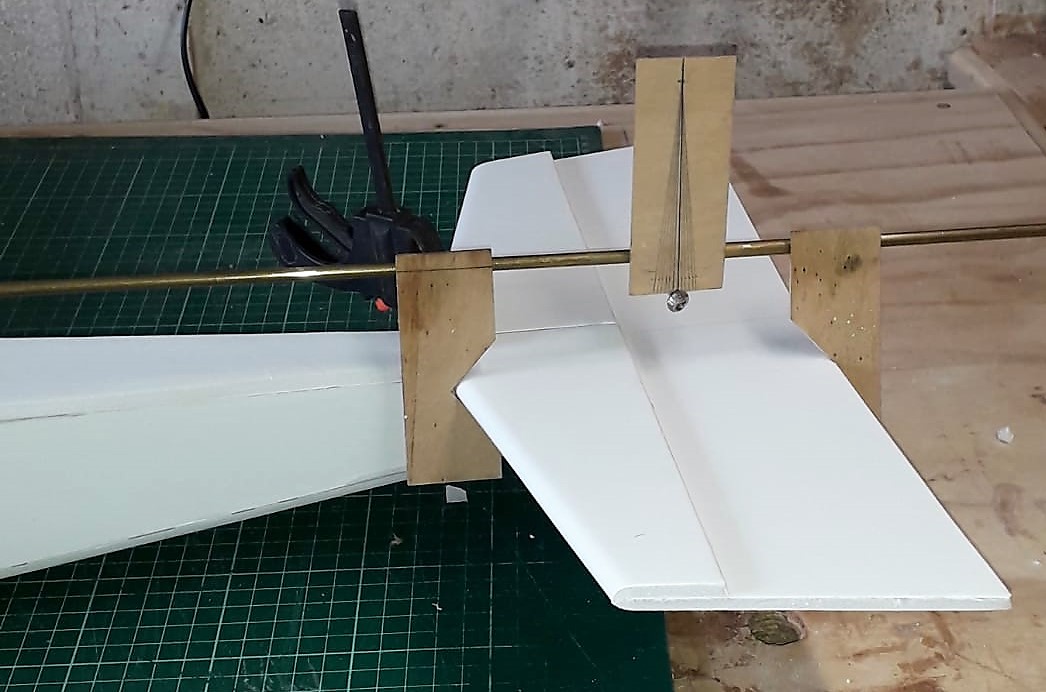 It’s lucky he didn’t bin it as the meter did the job beautifully on the new model. I don’t have any info about the model yet but hopefully I’ll be able to feature it next month.

Now for the last new model of this month and it’s yet another of the tiny fighters, this one being a Spitfire that Cream Egg bought at the Popham Model Show back in August. 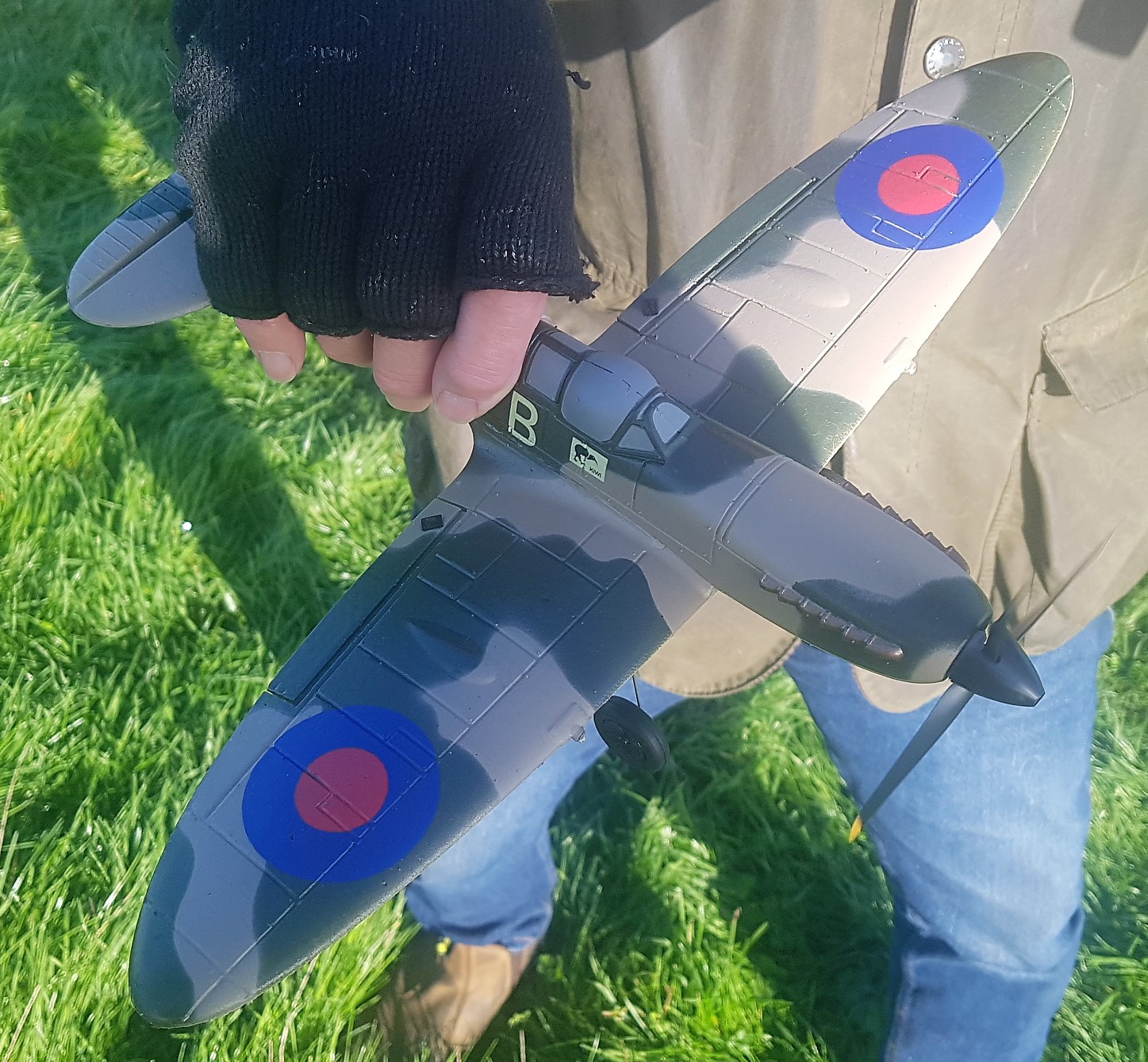 He only got round to flying it in Nov, it took 3 months to fit 4 dry cells in the transmitter! 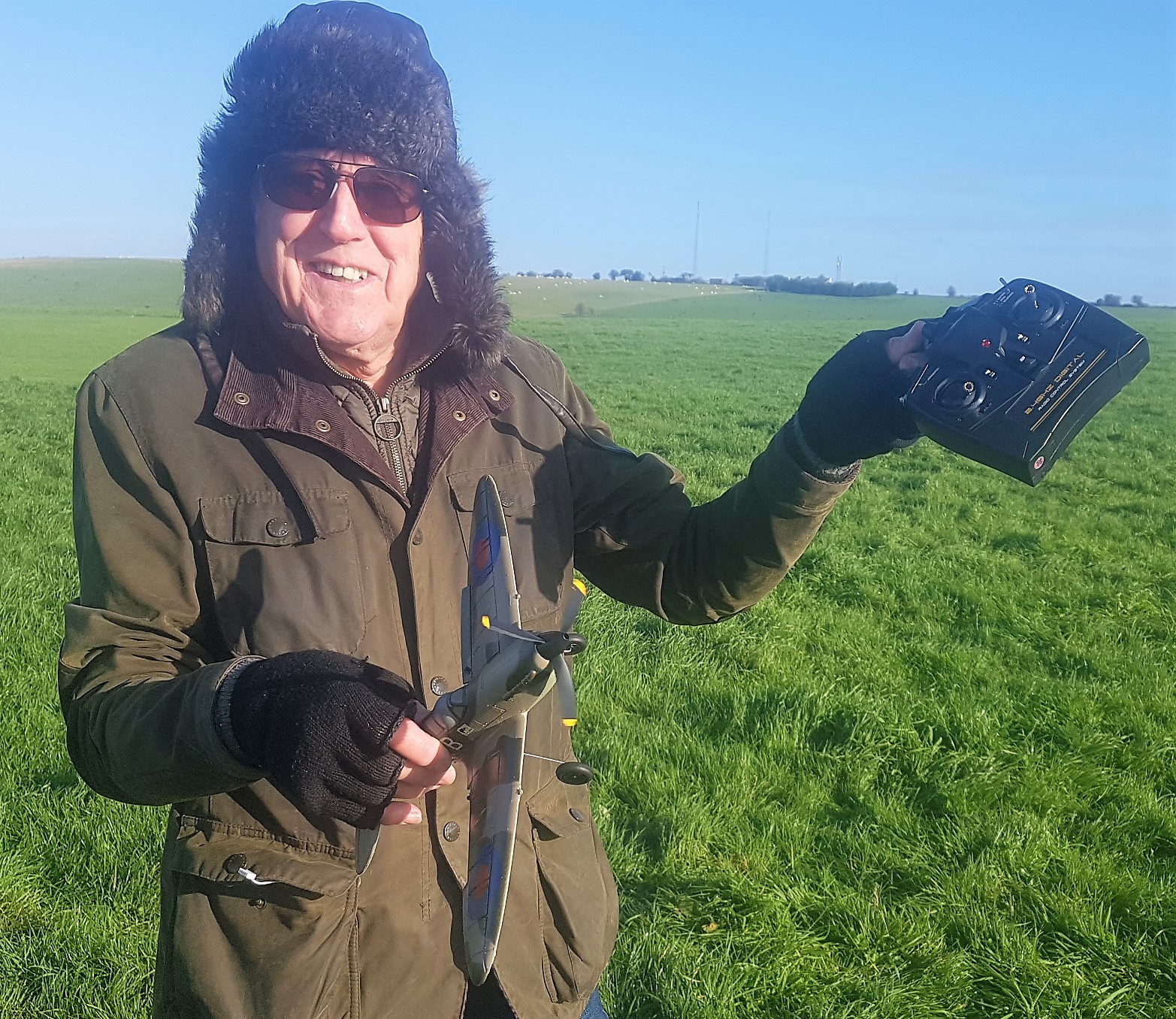 Like all the others (well except Mini Mike’s) it flies beautifully and Cream Egg is delighted.

Unfortunately Kryten wasn’t able to make it to the field this month so I have no new photos but here are some of his photos from previous months that I haven’t used before. 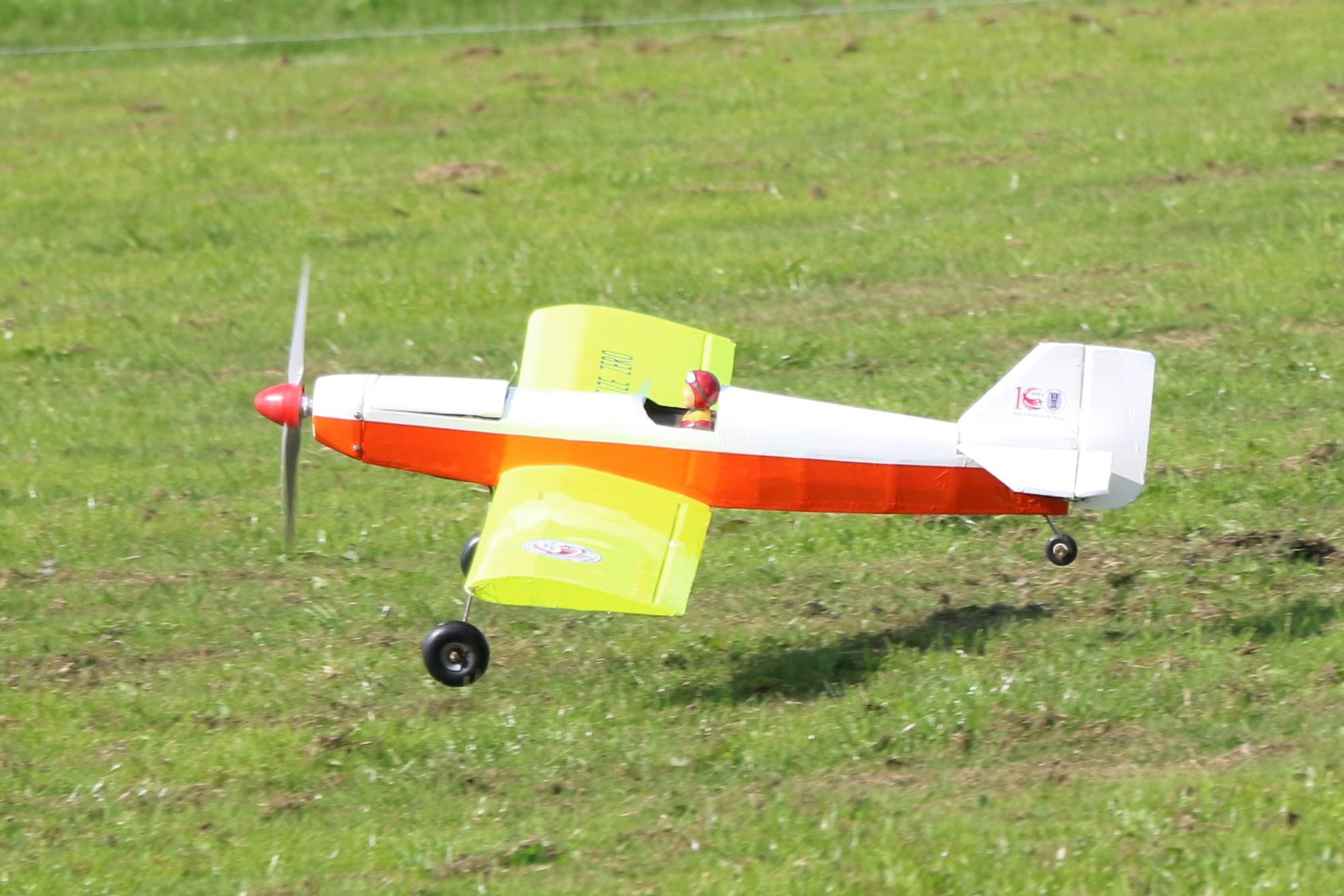 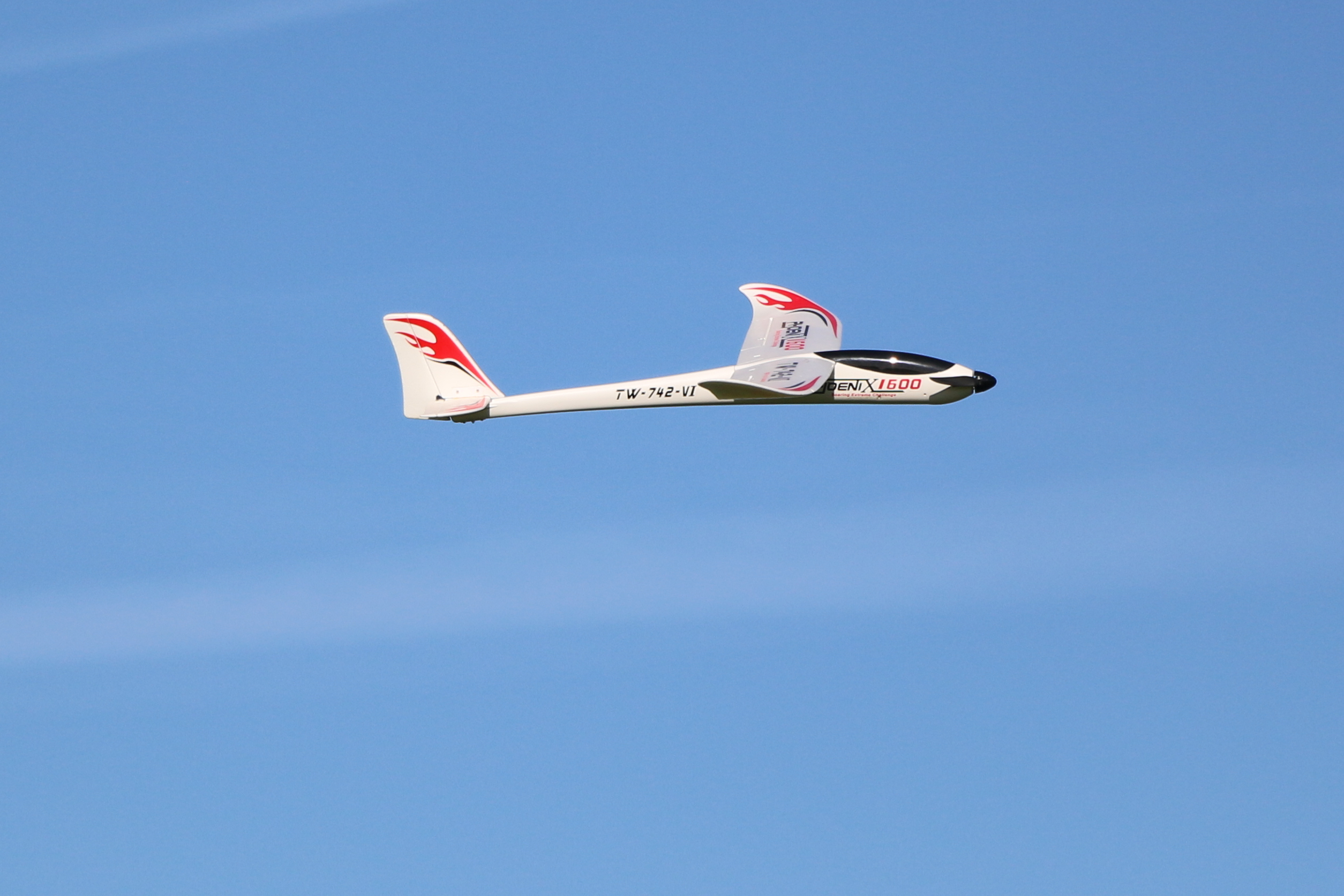 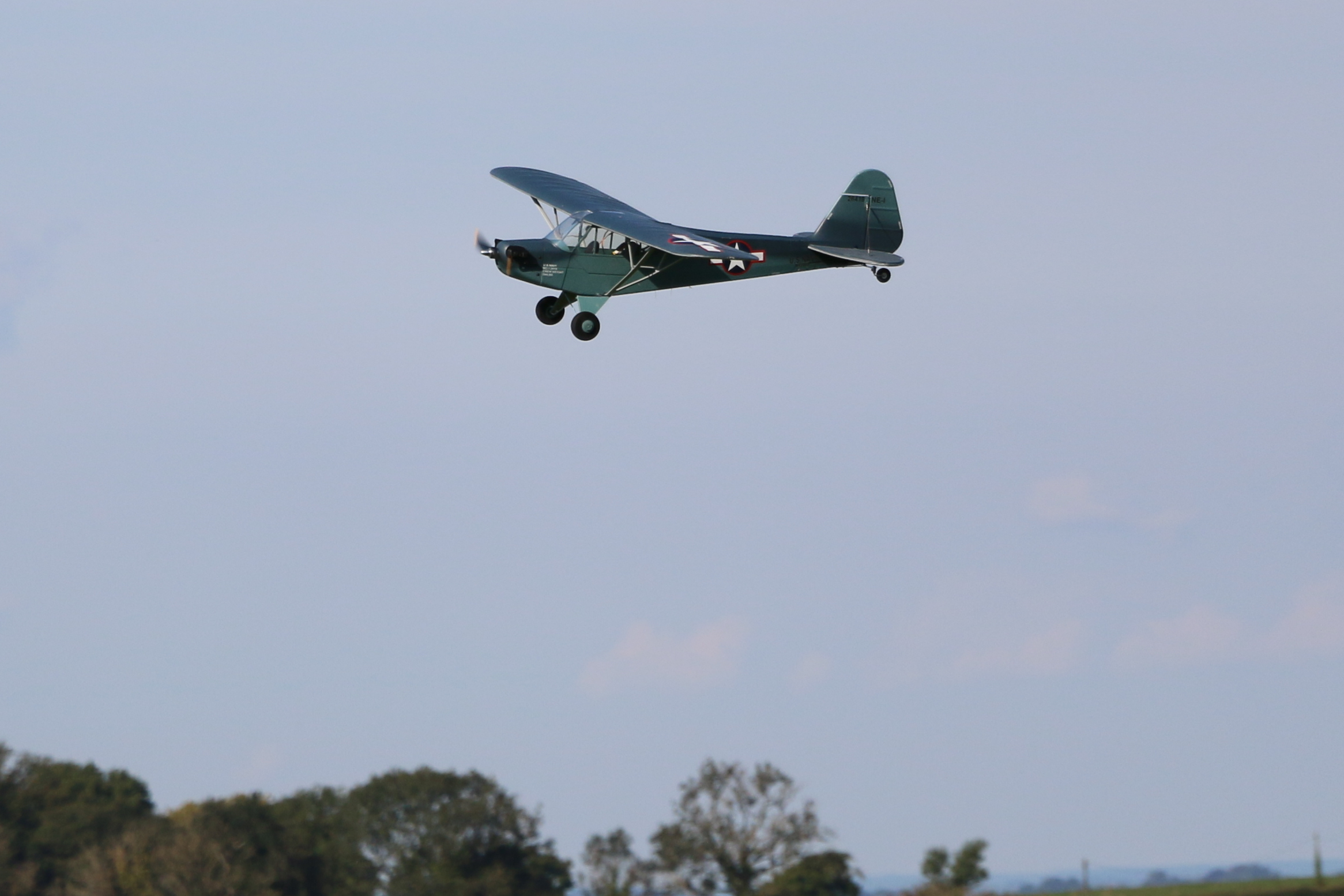 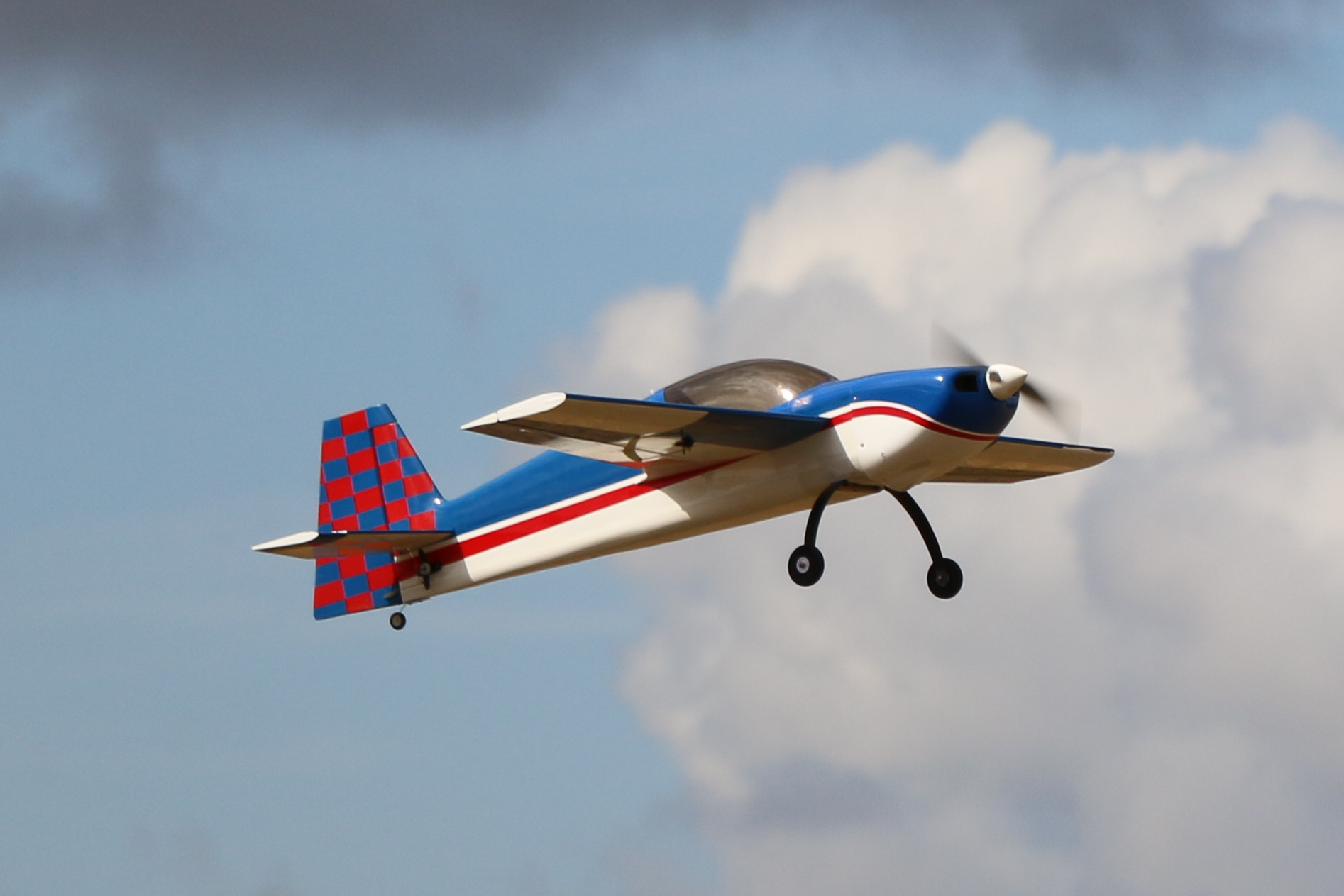 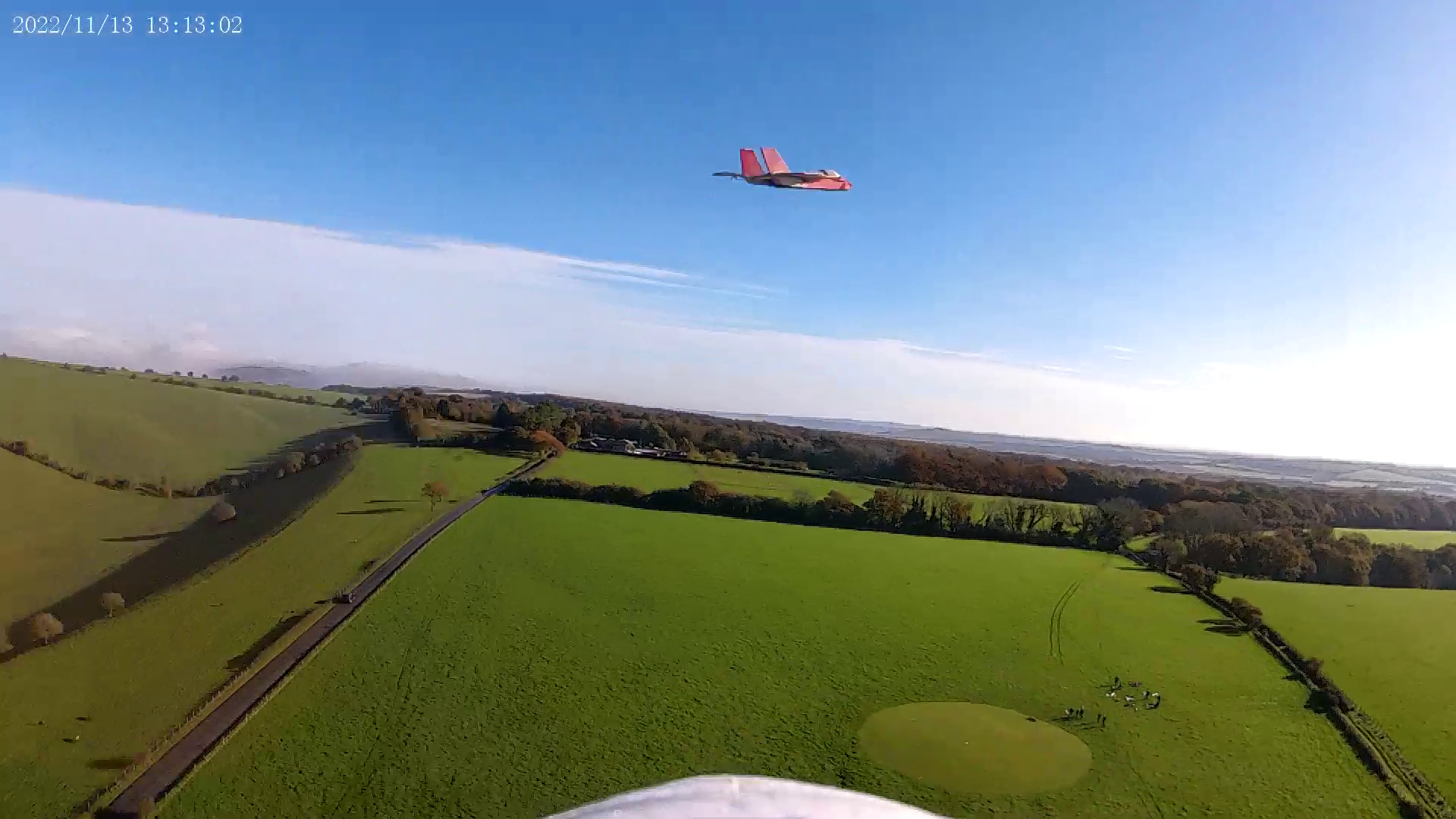 The last photo is a still taken from one of Dougal’s FPV flight videos and shows Charlie’s Alpha cruising past. I think it’s an excellent photo as it includes the patch, pits, and pilots. By the way, did you know that you can enlarge any Patch News photo by clicking on it?

Video time now which includes footage taken by me, Dougal, and Peter Fothergill. Please watch the video full-screen, it’s so much better with small models flying around.
If the video won’t play for you please click HERE

A young and foolish pilot wanted to sound cool on the aviation frequencies so once, when he was approaching an airfield at night, instead of making the usual call to the tower, he said: “Guess who?”
The controller promptly switched off the runway lights and replied: “Guess where!”